A lot of people lament the fact that smartphones and the mobile web can be taken anywhere, and they only force people to take their work with them, on say, a ski vacation to Utah. We've all seen people with their noses buried in their devices, or maybe we've been those people, reachable anytime, anywhere. You definitely have to have boundaries.

I prefer to look at the advantages these devices offer us. Photosharing is a huge one for me. Think about the days of taking a small digital camera to the mountain and snapping a few photos of you and your friends at the top of the mountain. The images are trapped until the experience is an afterthought. Maybe by midnight that day you can actually get around to downloading them, resizing them, emailing them around. I'm talking pre-smartphone/Facebook/blogging days.

Smartphones and mobile web access allow us to share our experiences in realtime if so inclined. Most phones out there have built-in cameras, and most smartphones have applications to link up to Facebook, Twitter, whatever your social web du jour is. The iPhone platform takes it one step further by offering hundreds of thousands of apps you can download. Below are a few quick reviews of iPhone "Camera" apps I have been playing around with:

Snapture is so loaded with a bunch of advanced features, you almost need a manual to learn how to use it. Good thing there is a well-organized info tab within the app that tells how to work it. Features include advanced focus options, tweaking effects like sepia, black & white, inverted, the ability to toggle between, 1x exposure or 3x burst mode (handy for trying to capture moving subjects), and my favorite feature, you can touch anywhere on the screen to snap a photo, instead of fumbling for a small shutter button. Comes in really handy when you are on a lift chair, trying to take a self-portrait, and guessing where the shutter button is while your fingers are freezing. New features in a recent release include Facebook, Twitter, and email sharing options. You also can choose whether or not to save them to the iPhone's native camera roll. If you don't save them and you close the app, no worries they are still there. Well worth the $1.99.

GorillaCam is brought to you by Joby, the company that makes those funky little flexible tripod thingies. They make one of these tripods with a special clamp to hold the iPhone. Many of the advanced camera features available from Snapture are available in GorillaCam for free, and they are in my opinion, a little more intuitive, as they are controlled in an easy to use preferences tab. Two features it has that tell me it would come in handy while using a Gorilla Tripod: the bubble level and the self-timer. The bubble level uses the device to help you get a straight shot when setting it on a tripod, and the self-timer let's you jump in the shot. You can control the delay of the self-timer. Finally, there is one feature you have to have: you can set the number of shots (say 100) and the time interval (say every 1 second) and do really cool time lapse shots. Of course, the app is free, but you'll probably want to buy one of those tripods.

My favorite camera app lately is Hipstamatic. It takes a little while to figure out the User Interface, but the idea is you can choose from a bunch of different lenses, flash types, and film types, and take digital images that replicate the look of old vintage cheapo instamatic cameras. They have a revenue model built-in, with a whole bunch of lenses, flashes and films that you can't use unless you unlock them by buying them, but the $1.99 version has enough variation that you can still have fun as is. Instamatic fun, if you take a photo of your kids skiing in a vintage style, and then as they say, "upload your awesomeness straight to Facebook." All this technology, and the end result is to make photos look like they were straight out of an old family ski trip photo album. You can really have some fun with this one. My only critique is it changes the aspect ratio of your image to square, but it's still fun. 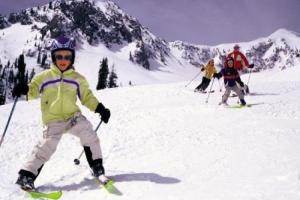 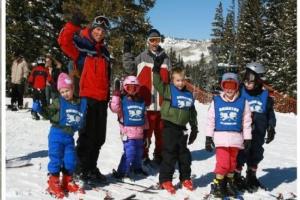 Check Out The Snowbird iPhone App