Opening Day at Park City Mountain Resort was this past Saturday, November 20th, and I was compelled to be there on the snow for a few reasons. First, PCMR was the first of the three Park City area resorts to turn the lifts. This is usually the case, and I like to support them for getting the season rolling, even if it's only a few weeks ahead of the neighbors. Even when opening day means all you get to ski on is what some call the narrow ribbon of despair, there is something special about saying I was there when they opened and I will be there when they close (I'm already setting up for my Last Day Of The Season blog post). I have to tell you, PCMR's coverage on all open runs was impressive, and the skiing didn't feel like opening day conditions. Another reason I had to be there: I picked up on a rumor there would be a meet-up of the Snowmamas & Snowpapas, an elusive group of bloggers, tweeters, Facebookers and family skiing enthusiasts who have been anointed and appointed as ambassadors at-large for PCMR. I casually tried to blend in. I even put a Snowmamas sticker on my jacket. I only managed a few clips of video, and will have to make a more serious undercover effort next time.

Pre-Season Fitness: Cross It Up

This Year I'm Thankful for Powder

Alta's Opening Day! The best is yet to come... 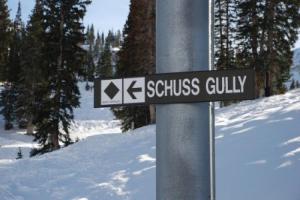 Silky Smooth at Brighton- What is Graupel?