Ask any local in the Wasatch Mountains about Utah skier MJ and they are sure to have a story or two.  With his striking long ponytail, wild beard, and green eyes it is obvious that this Vermont transplant is not afraid to tell his own story.  MJ kicked off this past winter November 15th and reeled off 130 consecutive days on skis.  There was no significant event on day 131 to keep MJ off skis, he just needed a break.  He did clarify that it would be “baffling” for him to ever miss a Little Cottonwood pow day.

MJ not baffled here as he drops a summer cornice. Photo Ben Williams

Throughout the winter, MJ mentioned that bacon fueled each day and he was proud of fact that his gear managed to find its way to the washing machine on occasion.  Speaking of gear, one pair of boots survived the entire season while rotating between four pairs of skis.  As of July 27th, MJ rallied his total ski count to 207 days.  He guessed that nearly 90 percent of days were inbounds at Alta and Snowbird with the remaining days reserved for backcountry tours.  If the pictures don’t already suggest, keep in mind that MJ’s 207 days are not built around a few groomed runs, but instead, hiking, sidestepping, jumping and getting rowdy.  His mellow, off snow demeanor transformed when clicking into his element, a ski on each foot.

While this year’s count is impressive, understand that MJ has the mountains in his blood.  He has skied for 28 years, growing up ski racing for Burke Mountain, Vermont at the age of four.  In fact, MJ mentioned that 100 days on the snow is quite normal for him.  Admittedly, he said “I’m pretty lucky to have spent so many days on skis.”  But luck did not bring him to Utah’s winters.  MJ left the East Coast and established a personal three year goal.  To encourage travel, MJ was determined to move every three years.  Three years have long passed, MJ has lived and skied in Utah for the past 10 years.  “Utah is where I was meant to live,” MJ stated.  From bartending to farming, MJ hooks up seasonal jobs that don't cramp his style, jobs that allow him to ski around the clock.  With skiing at the core of his existence, it is safe to say that MJ has truly found his place in Utah.

I asked MJ what he had planned for the remainder of the hot Utah summer.  Emphatically, he said “The summer snow is just getting good, so I’ll just keep skiing.”  I am truly baffled by his dedication and love to the sport.  MJ, good luck and thanks for the inspiration. Music in the Mountains 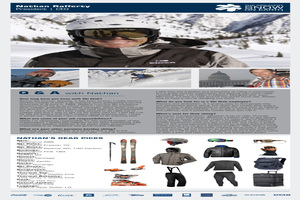