A January of ski lessons under my belt

My friend, Jenny Block, recently flew all the way from Dallas, TX to Utah to learn to ski on The Greatest Snow on Earth®. For those of you thinking you might be too old to give learning to ski or snowboard a try this season, Jenny proves that there is still plenty of time to start and learning has never been easier. Follow Block's Beginner Blog special guest series to witness her journey and determine if skiing just might be a possiblity for you too!

Oh! And, don't forget to check out great January Learn to Ski and Snowboard Month lesson deals near you at: skiandsnowboardmonth.com

The alarm went off that morning and my stomach dropped. The day before had been my lowest day on the slopes. It had been nothing but falling and failing and fearing. Honestly, I didn't even want to go back to the slopes that day, maybe not ever.  I wanted to go home.

I called Caitlin Martz at Canyons Resort, where I was scheduled to ski that day, and told her i had had a rough day the day before.

"Any chance I could start a little later today and take a private instead of a group lesson?"

That was the first key.

On the way there, I gave myself a little pep talk. You're here. You know how to ski. Yesterday was hard. So what? Learning things is hard.

When we arrived at Canyons, I didn't tell Caitlin any more about how hard the day before had been. She introduced me to my instructor, Alex Fleet. I told him how I was a beginner. A real beginner. And that I was nervous.

Alex didn't miss a beat. He took me up the lift and he watched me and talked to me and guided me and then he said to me, "You're much better than you think."

He took me back up the lift and led me down a different, harder, little bit steeper part of the same run and I did it.

Then we went again and I made parallel turns, maybe not perfect, maybe still with a noticeable wedge, but I did it.  Alex seemed genuinely pleased with me.

My lesson was over far too soon and I asked Caitlin for another round with Alex. She generously obliged, and back up the hill we went.

"So, do you want to go down first?" Alex asked, nodding his head.

My brain said no but my mouth said yes. It seemed pretty clear that that was the answer Alex wanted. And so I did. I went down first and I decided when to turn and how far to go across the hill and how fast was too fast.

When we got to the bottom, I couldn't have felt any higher. I did it. I skied. I really skied. I felt so strong and so happy. I was downright elated to be honest.

When we met back up with Caitlin and my girlfriend, they could already tell from my face that things were good.

"You had your breakthrough," Caitlin said.

My breakthrough. It felt like a badge and I wanted to wear it. I wanted to shout about it.

I know I'm still a beginner and that my technique isn't anything to write home about. Yet. But I can totally do this skiing thing and I totally love it.

The people and the mountain and the gear. I love it.

So, here's my advice if you've ever given a moment's thought to skiing. Trust yourself. Trust your gear. Trust your instructor.

Forget the fear. Invest in you. Go for it.

PowderTwins, Alta and 4 feet of snow 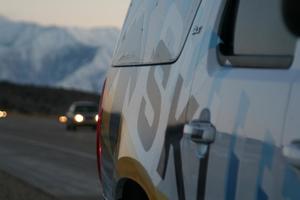