“El Niño”….  The phrase that is at the tip of everyone’s tongue this winter.  In August, we took a look at El Niño and what it might mean for Utah, specifically with regard to “the blob,” an area of warm water that many considered responsible for last year’s dismal snow numbers throughout much of the western states.  As luck would have it, “the blob” has had seemingly no effect on our weather so far this winter.  El Niño, on the other hand, is greatly influencing weather not only in Utah, but throughout the world.

While El Niño peaked, statistically speaking, in late November, the effects on weather patterns are often delayed until mid-winter, when the jet stream is at its strongest.  El Niño acts as a catalyst to strengthen the southern branch of the jet stream.  This can bring copious precipitation to the southern tier of the United States, from California to Florida and everywhere in between.  In December, the Eastern half of North America was stuck in a warm pattern that literally meant zero snow for many New England ski resorts.  Out west, we were able to build a healthy snowpack during December.  In fact, every river basin in the state was above the median snowpack numbers as we turned the corner into 2016:

While this pattern was a good one for Utah, it wasn’t a typical El Niño pattern.  During the first two weeks of January, we’ve seen a gradual transition to a more classic El Niño pattern.  The southern branch of the jet stream brought heavy rain and flooding to Southern California during the first week of the month.  Utah saw scraps, but the best moisture stayed to our south.

Now, we have entered the second half of January and it is looking increasingly likely that El Niño will push its influence into our mountains.  The Pacific is loaded with moisture right now.  So much so, in fact, that we have actually seen an unprecedented hurricane form in the Central Pacific – the earliest such occurrence on record!  Utah has seen several storms over the past week with more storms in the forecast.  The red plume in this image indicates high precipitable water, in other words, abundant moisture being drawn from the tropics to enhance these systems:

A true atmospheric river!  You may look at these images and assume that the Sierra Nevada Mountains will be getting the brunt of the moisture. You are right.  However, the Sierras are prone to high snow levels and heavy, wet snow (“Sierra Cement”) in these events.  Typically, by the time the moisture makes it to Utah, it has been infiltrated to some degree by colder, continental air that allows for snow levels to stay lower. Creating low-density, fluffy powder.

Of course, there is no guarantee that storms will continue continuously from now on.  El Niño winters are just as prone to dry spells as any other winter.  However, at this point I like our chances for Utah to receive more typical snowfall amounts as we head through the rest of the season – remember, when you average 500 inches, “typical” can be pretty impressive.  January 15th is only a third of the way through the season, which means that a lot of snow is likely to fall between now and May.  It will be fun to watch El Niño’s influence on our weather.  For up-to-date forecasts throughout the rest of the season, check out WasatchSnowForecast.com 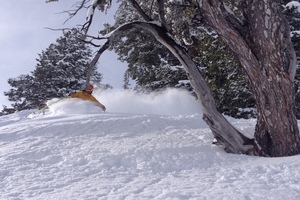 Powder Skiing above the Clouds at Snowbasin