Utah Governor Gary R. Herbert officially declared January Learn a Snow Sport Month in the state of Utah today. This declaration is in conjunction with a national effort to promote the learning of snow sports during the month of January.

Yeah! Skiing and snowboarding are excellent ways to stay healthy and active during the cold winter months. I, for one, am very excited that the Governor is supporting this important intiative aimed at making learning to ski and snowboard more affordable for locals!

For the second year, Alpine resorts, Nordic centers, and state and national parks in thirty-two states will offer special learn to alpine ski, snowboard, cross-country and snowshoe packages to their locals. Utah has served as a leader in this initiative and will once again be offering great beginner deals with its Lucky 13 promotion. It's never too early to plan to your New Year's resolution. Why not make yours learning to ski and snowboard?...Or, help a friend who doesn't get out on the slopes!

What's up with our storm? 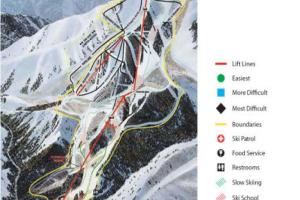