Thursday, a break between finals and we jump at the opportunity to head to the mountains. Westminster College might be one of the only schools in the country with access to big mountain skiing in between classes. The 30-minute commute from campus to Alta is a major draw for many like-minded skiers at Westminster.

A group of seven of us head up in a caravan. Many of us, including myself, moved from far away to attend a school with access to historic resorts like Alta. The discounted student season pass goes for $599.00 and includes three complimentary day passes to Snowbird, Park City and Deer Valley. The pass also gives students access to 50% off day tickets to resorts such as Jackson Hole, Mammoth and Squaw Valley. The deal is pretty great, to say the least, and attracts many Westminster students to the amazing resort.

Growing up my father had told me stories of skiing at Alta when he was my age. I wanted so badly to race down powder covered mountains with friends as he had described. When it came time to go to college, Westminster was the obvious choice. As the seven of us drove up Little Cottonwood Canyon we talked about how unbelievable our lives were. On a beautiful blue bird Thursday we were able to ski fresh snow with great friends and still make it back in time for a final in the afternoon.

Alta has some of the most playful terrain I have encountered. With beautiful bowls of powder and steep tree lines, it’s also incredibly versatile. Because the resort does not have a terrain park, I have found that it attracts mostly big mountain powder hound students, which leads to really fun aggressive days. That being said I think that Alta provides some of the best-groomed runs and beginning terrain around. I have taught many Westminster students to ski at Alta and in the same day pushed myself to the limit on steep lines.

Overall the resort is a college student’s dream. Alta is 30 minutes from school, reasonably priced and offers amazing skiing. It’s hard to believe that as students who mostly survive off ramen noodles and mac and cheese we get to experience more days at Alta in a season than most people spend in a lifetime. 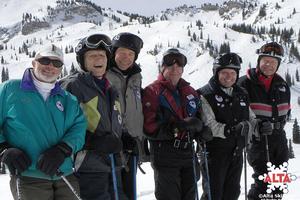 Remember that one time?