My Year of the Yeti

Meet my amigo Farid, who looks back on a season that was his best ever.  Armed with a Ski Utah Yeti Pass, Farid shows us all how to have a good time, even when many complained about the low snow totals.  What low snowfall?  Here's to Farid and the best season of his life.  Enjoy his story:

It’s the month of May and I’m within 5 days of reaching the century mark on snow this season. For the past 6 months I’ve used an app to meticulously record the date, time, location, and activity that I completed that day on the snow in order to help me achieve one of my biggest ski goals. This season I’ve already skied or snowboarded on the slopes of all 14 resorts in Utah, launched my first back flip, slid my first single rail, and now I’m surrounded by still snowy mountains in Southeast Alaska, but even with 100 days so close, the end is beginning to feel natural and I’m tempted to call it a season.

Considering my first ski season was spent in a cast after I gradually slid my skis into a tree and broke my leg within 30 seconds of being placed on them, 100 days would be impressive. Even with that ominous beginning I still wanted to learn how to ski and soon after, started going on annual trips with my family. I also learned to snowboard. I started getting season passes. I started teaching others how to ski. It seemed like everything I did on the snow led me to want to do something bigger and better the next time, and it wasn’t long before I found myself in Utah.

During my first two winters in Utah I tried anything I could to score cheap ski deals from attending ski premieres, charity events, trade shows and eating fast food for discounts, to begging friends to let me have one of their buddy passes. I also benefited from working in an office that was at a ski resort and having a full season pass to Alta. By being resourceful and lucky and using time off to hit the slopes, it was easy and affordable to ski around 8 or 9 resorts and about 70 days a season of The Greatest Snow on Earth®. After a 700+ inch consistently deep winter though I needed something like the Ski Utah Yeti Pass to take it to the next level.

The Ski Utah Yeti Pass gave me one day at each of the 14 ski resorts in Utah. I combined this with a weekday pass to Alta, maintained my resourceful approach to finding discounted ski deals, and added some time away in the Mountains of Colorado and Alaska. All of this contributed to my best ski season yet, even though it was historically one of the worst snowfall season totals ever.

Utah’s terrain and ski resorts offer something unique and extraordinary. I skied some solid early season groomers and hit the town in Park City. I found my share of the steep and deep in Little Cottonwood Canyon and the backcountry always offered an adventure or at the very least a workout. I saw Robert Redford on a Weekend at Sundance, dropped some cliffs in Big Cottonwood Canyon, took some snowcat laps at Eagle Point, and hit up the Hotsprings after skiing in Ogden. I spent the day riding park with my friend at Beaver and did it solo at Brian Head after that same buddy bailed post Vegas. I capped my season off with an epic showing in the Canyon’s Pond Skimming contest before heading North to Alaska.

I’m not so sure if I’ll get to 100 this season, but I am sure excited about the prospects of an even bigger, better 100 days next season!

As Farid says, you don't want to eat at fast food restaurants for lift ticket discounts, instead, reserve a Ski Utah Yeti Pass. 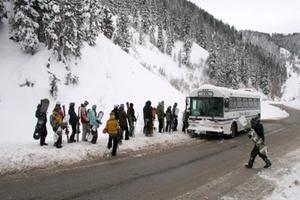